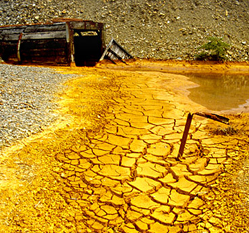 The conservation of features of geological importance is essential as such sites are vital in the training of future geologists and as research resources. Although much degree-level geology is today taught indoors, it is a science which is still to a large extent field and specimen-based.

In 1996 I began the four-year Minescan project. This was commissioned by the Countryside Council for Wales (CCW) - now Natural Resources Wales (NRW) - and I undertook the project as a consultant to the National Museum of Wales (NMW). The project involved field assessments of the conservation value of over 1000 old mines and other mineralogical sites throughout Wales, and the data obtained permitted an objective ranking of the sites relative to one another.

As a primary result, a comprehensive network of potential SSSI and RIGS sites was identified, representing all aspects of mineralisation and metallogenesis in Wales. These sites have a real chance of survival as future scientific resources. The Minescan reports and databases are available by arrangement through regional NRW offices.

A look at Wales' mineral sites may be had by clicking here. Central Wales RIGS group's website is here.

Pollution at former minesites is a serious problem in parts of Wales and I have been involved in several case studies and remedial projects. Issues met with have included acid mine drainage in which the unstable iron sulphides pyrite and marcasite react with moist air. The result from the reaction is dilute sulphuric acid with a heavy toxic metal loading, a combination of pollutants that causes severe damage to aquatic life in nearby watercourses.

Potentially catastrophic incidents may occur where a tunnel entrance has become dammed-up by collapsed debris. In 1992, such a dam had formed at the entrance to Cwmrheidol No 9 Adit , near Aberystwyth. Had the dam failed, over 500,000 gallons of ochre-laden water with a pH of around 2.5 would have suddenly entered Afon Rheidol, killing most river-life.

I was involved, with Simon Hughes, in the controlled dewatering of the adit and removal of the dam - a successful job commisioned by the National Rivers Authority, back in 1993. Easily the messiest job I have ever tackled, with a full photographic record: please click here for the story!