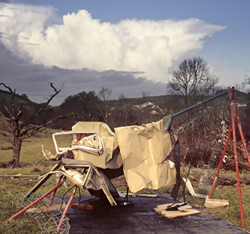 I have been involved in photography for nearly 30 years now, ever since obtaining my first Canon A-1 SLR. Today, though, my work is done with a Nikon D300 DSLR and a variety of lenses. My images have been published by the BBC, newspapers such as the Guardian and have been used by various non-commercial to commercial concerns - from the National Museum of Wales to Gordon's Gin! The natural world -and especially wild weather here in Mid-Wales - are my specialities.

In 2007, I launched my unique online image-library, featuring the weather and landscapes of Mid-Wales. Set in and around the beautiful Dyfi Valley, the collection features the area's mountains, rivers and coastline in all their moods, from benign to furious, as the seasons and weather change.

The images are available for sale in electronic format for multimedia use and also as prints. I am also available for illustrated talks on weather-photography in Wales and have in the past delivered lectures to the Royal Meteorological Society in London and Manchester. For the image-library, which users will obviously want to view on a PC rather than a mobile, please follow the link below:

In the late 1990s, I started what turned out to be a remarkably popular image-rich blog dedicated to thunderstorms, blizzards, floods and other severe weather in Wales. The blog has documented notable weather-events (with images), as and when they have occurred. In more recent years the focus has been on the more extreme events which may vary from widespread to nonexistent in any given season. Thus, in crazily-stormy early 2014, there were several pages added; so far in 2019, nothing. The blog has attracted attention from people worldwide (often with an original Welsh connection) and the media. To access my severe weather blog, again photo-centric so not set up for mobile users, please follow the link below:

Since 2010, I've also been involved with Skeptical Science, motto: "getting skeptical about global warming skepticism". Here I write periodic blog-posts concerning climate science and the politics that surround it. This work is done as a member of an international, all-volunteer team. The site has won much acclaim (and an award or two) for its contribution to climate change communication. I am proud to be part of it.